As so often happens – and like so many of you who also battle procrastination – I have waited until the last moment to get going on this project. This is okay… I work so well under pressure! At least that’s how I make myself feel better about it. =P I got all of the dyes made last night… that actually took up the majority of my time as you have to boil the water and measure each one out and then wait until they are room temp to actually use. But thankfully you only have to make the dye once.

After that I emptied all the guts out of the eggs using the egg blower (that’s a LOTTA scrambled eggs for breakfast!). I had one casualty sadly, so I’ll have to redo this little guy! 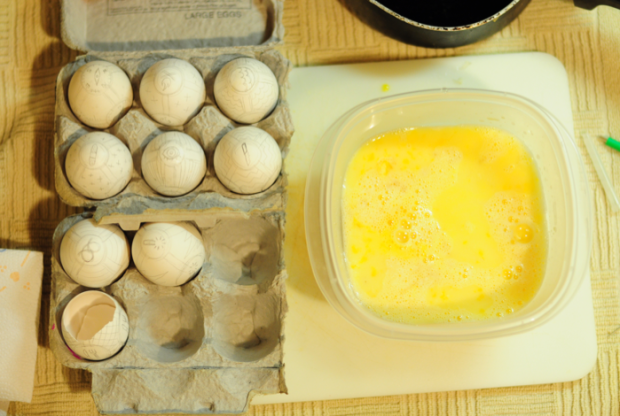 Then finally to the good part – doing the first of the eggs for the survival kit! Each egg will represent a different item in a survival kit – such as food rations, flashlight, knife, compass, bandages, etc. This first one was the water ration. I really wasn’t entirely sure how good it would look at first – just sorta chose a few colors to keep things simple and off I went. But I was surprised when I melted all the wax off at the end! It turned out so well! Below are a few pictures of the process..

Drawing on the wax, about to do the final color of dye.

The alternating yellow and blue waves were actually a mistake… that was around midnight and I was so tired that I totally messed up… drawing the waves on too soon so that they came out yellow. I decided to just alternate sides and actually like how it came out even better. Yay for exhaustion!

So there we have the first egg! Eight more to go. Somehow I will conquer these in the next few nights…
wish me luck on my journey of late nights with candle wax & egg dye.