I’ve been wanting to experiment with this sort of imagery in the project for some time now. I’m finding already in the first shoot that there are a lot of stories to glean from it. There’s many different meanings tied into the idea of fog when relating to grief. It represents the odd, hazy way that we operate in the world after a traumatic loss. It also speaks to the insulating quality of that haze… how – even though it is confusing and sometimes frightening to us – it is a very real necessity in our healing. It is a brilliantly evolved automatic response to extreme trauma. I also see fog as a spiritual symbol that can speak of the boundaries and connections between this life and the next, between souls still living here and souls living on in the hereafter. For the next few weeks I’m thinking that I’ll be exploring the stories that lie here.

People who have been through any kind of horrible trauma will be able to tell you about a thing called “the fog”. It was one of the most frightening and confusing aspects of my fiancé’s death. It felt very much like being only half existing in this life, and half existing in some surreal other world that no one else could seem to see. It felt insulating and isolating at the same time. It was sometimes calming and other times incredibly frustrating. I was entirely incapable of organizing my thoughts for even the most basic things after he died. I could not plan or make appointments or pay bills. I went 6 months without paying a credit card that only had $200 on it because I couldn’t remember and because I just didn’t care anymore about a thing like credit. I could not remember much of any new information. I forgot entire chunks of old information – including simple tasks I had spent the past four years doing at my job. For about the first year after his accident, I floated in this world most of the time. I felt completely handicapped – as if I had suffered some blunt force trauma to the head indirectly from his accident. And in a way I did, because emotional trauma really can affect your brain function in some very tangible and major ways. That in itself was scary.

The fog is absolutely necessary for healing though. We need to be removed from our overactive brains and the bustle of daily life. We need to be disconnected, to have a veil up for a time so that we have the quiet needed to listen to our own pain and feel through it. Even though its new and unfamiliar territory – I think it can help to see it as a beautiful response of self protection when we need it most.

If you’re new to this project, you can read more about it in this post. Or to see the full image gallery visit 2014 PROJECT. Please share with anyone who you feel can relate to the imagery, my hope is that it gives many others a visual for something they are going through in their own lives. 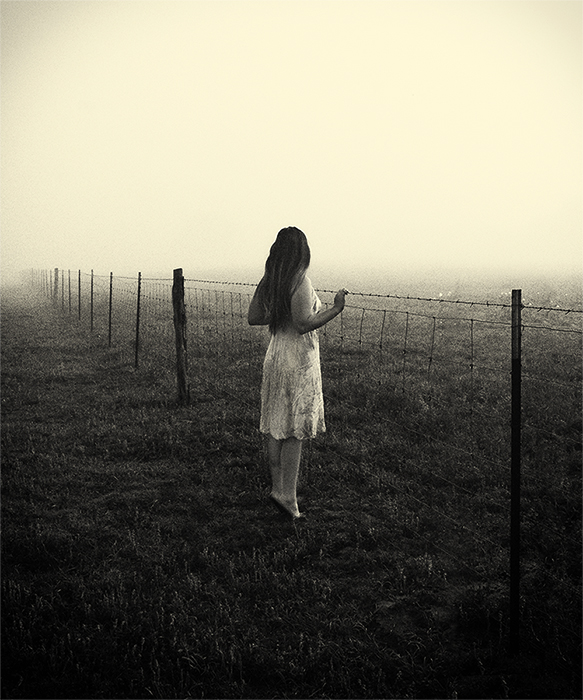 If you’ve ever lost anyone very dear to you – particularly in a sudden way – you know what it is like to sit waiting for your old life to return. This place is your world between worlds. Your threshold of this life and the afterlife where your loved one is. The edge of the life you were dropped into and the life you had when they were here. Trying to see the past. Wishing to reach it. In grief, we spend many months and even years standing on this threshold… wishing for our old life to return.

I spent much of first year after Drew died in this place… waiting, hoping, begging for his return. Still a part of me doesn’t understand what happened – and waits there. I know this because I continue to have dreams in which my subconscious makes up all number of reasons for why he is not here, trying to process it. No matter how much I embrace this very different but equally beautiful life I was left with, no matter how many beautiful and joyful things have happened in the past two years… still part of me waits. And maybe, I think, a small part of me always will be waiting there for him to return.