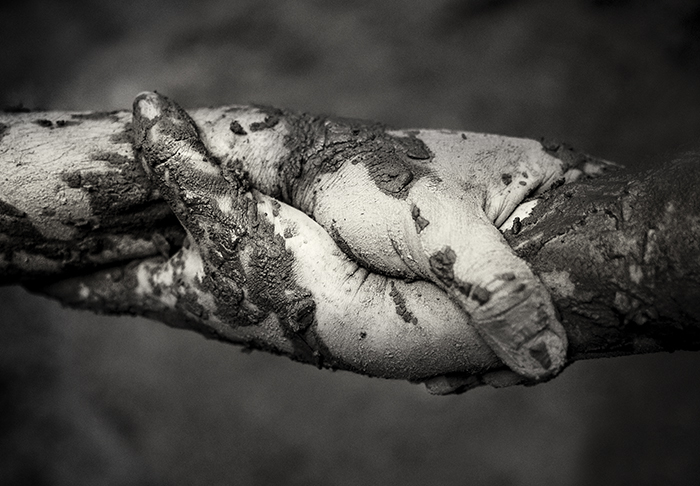 As I continue in this direction with hands I keep being drawn to… I have found myself suddenly at a powerful intersection of both my work and my life. Since the earliest days of the “Still, Life” series, I have held this image in my heart. It was always meant to be a continuation of the stories told in Hope and Desperation (below). It first came to me at a time when I was seeing a variety of images that included a second figure… a man. Some of these images were meant to speak of a connection to my late-fiance in the spiritual realm, while others were meant to speak of someone else… someone new. I decided hiring a male friend just to capture these stories wouldn’t work. It needed to be real. It needed to actually be the next man in my life. And without even a remote glimpse and no feeling of even desiring someone new yet, I put these ideas aside to wait patiently for that day to come.

And here we are, arriving at the day this image finally came to be. It is precisely what I imagined for all those many months… except for one thing: the story on the other end. That I could have never known.

The Dance depicts a meeting of souls. That pivotal moment in time when two paths cross in the darkness and a bond is formed. It is the story of brothers, of sisters, of soulmates and friends… each has met desperation and hope in their own way – making them unafraid to see one another in the darkness. In this way, something very powerful and solid is created from the dark places inside us. Such meetings are sacred. For it is the darkness that bonds us to one another in ways we cannot ever bond in the light. It is the tests and trials found here that reveal the truth of a person’s character, integrity, and loyalty. It is the place that changes us, and the place that unites us.

There is something I cannot describe as anything but magic when I think about this image. To have spent so much time with this visual in my head and heart – with no idea when I would ever meet this person or be able to create it – and to now see it made real. And not only to see it, but to now know both stories. To know now what I didn’t know a year ago – that this man’s story would end up being just as important as my own story to the shot.

This soul, who I didn’t even know existed just 4 months ago, matches my own dark journey in a way I could have never imagined. A way I will always wish didn’t exist… because he also endured the death of his love. His beautiful, bright-shining, courageous wife of twelve years. To an agonizing long-term illness. A journey very different to my own sudden loss, but a journey through the darkness nonetheless. As a relationship has begun to unfold between us these past months, I came to know with certainty… he is the one I have been waiting for – to tell this part of both of our stories, and to live this part of my journey.